Dr. Nazia Karsan is a neurologist currently working as a postdoctoral researcher within the Headache Group at King’s College London, led by Professor Peter Goadsby. She also facilitates a weekly children’s headache clinic at Great Ormond Street Hospital in London with Dr. Prab Prabhakar. In her current role, she sees, diagnoses, and treats primary headache disorders, including migraine and cluster headache, as well as other trigeminal autonomic cephalgias (TACs).

Her research focus is on understanding the neurobiology of primary headache disorders, particularly migraine, using experimental medicine and functional neuroimaging. In addition to pediatric and adolescent headache, she also has interests in characterizing the extended migraine phenotype and understanding the nonpainful manifestations of the disorder. Dr. Judith Owens is a senior faculty member at the Pediatric Sleep Center at Boston

Children’s Hospital in Massachusetts and a professor of neurology at Harvard Medical School. She is an internationally recognized authority on pediatric sleep and the author of over 175 original research and review articles in peer-reviewed journals, chapters, and books on the topic.

Her research interests focus on the neurobehavioral and health consequences of sleep problems in adolescents, including the role of school start times, sleep health education, and the cultural and psychosocial issues that impact sleep. She was the lead author of the American Academy of Pediatrics 2014 policy statement on healthy school start times and is on the board of directors of the national nonprofit organization Start School Later/Healthy Hours. She is currently president of the International Pediatric Sleep Association.

Dr. Owens received her undergraduate and medical degrees from Brown University and a master’s degree in maternal and child health from the University of Minnesota. She completed fellowships in behavioral pediatrics at Minneapolis Children’s Medical Center and in child psychiatry at Brown University. Lauren R. Natbony, MD, FAHS, is a board-certified neurologist and fellowship-trained headache specialist and the founder and medical director of Integrative Headache Medicine of New York.  She is also an assistant clinical professor of neurology in the Division of Headache and Facial Pain at Mount Sinai’s Icahn School of Medicine.

Dr. Natbony received her undergraduate degree from Stanford University and her medical degree from the University of Miami Leonard M. Miller School of Medicine. Dr. Natbony completed her internship in internal medicine and residency in neurology at the University of Pittsburgh Medical Center, followed by a fellowship in headache medicine at the Icahn School of Medicine at Mount Sinai. She also received advanced training and certification in medical acupuncture at Harvard Medical School. She is board certified in neurology by the American Board of Psychiatry and Neurology, and in headache medicine by the United Council of Neurologic Subspecialties. Dr.Natbony has been named a Fellow of the American Headache Society (FAHS), a reflection of her professional and scholarly achievements in headache medicine.

Dr. Natbony is a frequent speaker at national headache conferences and provides educational lectures to healthcare professionals worldwide to improve migraine and headache care. Her work can be found in multiple textbooks and peer-reviewed journals, including Headache and Current Pain and Headache Reports. Dr. Natbony conceptualized and authored the book Integrative Headache Medicine: An Evidence-Based Guide for Clinicians, which provides illuminating, evidence-based approaches for combining traditional medical therapies with alternative treatments for headache. Dr. Natbony is also a mother, an acupuncture and lifestyle medicine expert, and someone who experiences both migraine and headaches. Her practice focuses on empowering patients with integrative healing tools by creating individualized holistic treatment plans. Dr. Natbony can be found as a featured expert on the Today show, Self magazine, Good Morning America, Time magazine, and other media. Dr. Bethany Ranes specializes in bridging neuroscience and psychology by approaching mental health from the perspective of cognitive neuroscience. Her work focuses on translational science — taking new ideas discovered in laboratories and helping turn them into effective therapies that directly benefit patients. Her current passions involve working on brain-based therapies for chronic health conditions, with a particular focus on chronic pain.

In collaboration with fellow health professionals, Dr. Ranes works to help develop neuroscience-informed interventions for behavior change and nonpharmacological treatment options for conditions like depression, anxiety, diabetes, cardiovascular issues, and autoimmune disorders. She has previously worked as a lead research scientist for the UnitedHealth Group, the Hazelden Betty Ford Foundation, and the U.S. Army.

She currently serves as chief scientific officer for Healing Track — a digital version of pain reprocessing therapy — and she works as a consulting scientist for organizations and companies that wish to blend emerging science about the brain with accessible healthcare solutions in order to help bring a balanced mind-body approach to modern healthcare. 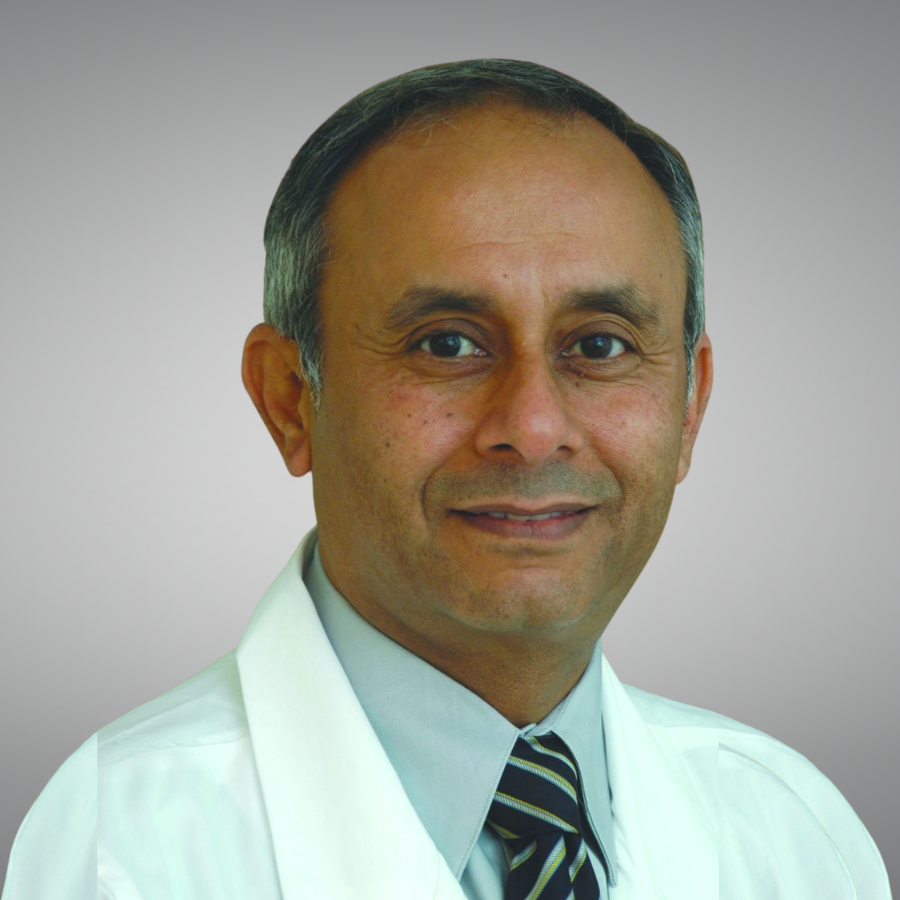 Dr. Pasricha is currently the chair of medicine at Mayo Clinic, Scottsdale, Arizona. Formerly he was the director of the Johns Hopkins Center for Neurogastroenterology; as well as the founder and co-director of the Amos Food, Body and Mind Center. In addition, he previously held appointments as professor in the Department of Neurosciences in the School of Medicine and at the Johns Hopkins Carey Business School.

At a national level, Dr. Pasricha is the chair of the National Institutes of Health–funded multi-center Gastroparesis Clinical Research Consortium. In the past, he served on the National Commission on Digestive Diseases, appointed by the United States Congress to provide a roadmap for progress in gastrointestinal disorders. He is also the founding chair of the Center for Gastrointestinal Innovation and Technology. Dr. Pasricha served on the Food and Drug Administration (FDA) GI Drug Advisory Committee for several years and continues to provide advice to the FDA on an ad hoc basis.

Dr. Pasricha has authored more than 300 manuscripts and book chapters and has been credited with more than 50 patents for novel gastrointestinal diagnosis and treatment methods. His extensive publications on the enteric nervous system and gut-brain axis have gained global attention. He has served as associate editor for publications including Gastroenterology, the Journal of Pediatric Gastroenterology and Nutrition, and Gastrointestinal Endoscopy, as well as acted as senior editorial advisor for Digestive Diseases and Sciences.

He has received the American Gastroenterological Association Master’s Award for Outstanding Sustained Achievement in Gastroenterology and the Nobility in Science Award from the National Pancreas Foundation. In addition, he has consistently been on Castle Connolly’s list of America’s “Top Docs,” as well as on the list of “Best Doctors” in America. Dr. Schindler is a board-certified neurologist and headache medicine specialist at Yale School of Medicine in New Haven, Connecticut, and the medical director of the Headache Center of Excellence for the VA Connecticut Healthcare System. Among her efforts to optimize the management of headache disorders, she developed and executed the first studies seeking to understand the effects and mechanisms of action of psilocybin in cluster, migraine, and post-traumatic headache.

Previously, she studied the neuropharmacology of psychedelics and other serotonergic compounds in the context of receptor binding and intracellular signaling at Drexel University College of Medicine. She has published and presented on the biochemical, behavioral, neuropharmacological, neuroendocrinological, and therapeutic effects of psychedelics. Dr. Schindler remains at the forefront of headache medicine, and has won several awards for academic excellence. She has authored a number of publications and book chapters. Alicia Wolf is a cookbook author, recipe developer, and vestibular migraine advocate. She was diagnosed with chronic vestibular migraine in 2016. Originally a self-taught chef, she honed her skills by attending culinary immersion programs in Dallas, Texas; The Cook’s Atelier in Burgundy, France; and with Chef Lucia, a recipe developer for Chef Rocco DiSpirito. Alicia’s recipes have been featured by Yahoo!, Parade, mindbodygreen, and on local morning shows like Today and Good Morning Texas. She is a Vestibular Disorders Association Ambassador, and her advocacy work for vestibular migraine has been highlighted by Healthline, the American Migraine Foundation, Miles for Migraine, Self magazine, and Migraine Again.

Her first cookbook, The Dizzy Cook, was published in February 2020 and is an Amazon bestseller in the pain-management category. Her new cookbook, The Mediterranean Migraine Diet: A Science-Based Roadmap to Control Symptoms and Transform Brain Health, was created in partnership with her neurologist, Dr. Shin Beh. Both books are available almost everywhere books are sold. Stephanie Nahas completed her undergraduate degree in biology at Harvard University before earning her MD at Rush Medical College. She completed her internship at Rush, followed by a neurology residency and a fellowship in headache medicine at Thomas Jefferson University Hospital. In 2007, she became the fellowship program director at the Jefferson Headache Center, where she is currently an associate professor in the Department of Neurology.

A committed advocate for migraine patients, she has regularly attended Headache on the Hill with the Alliance for Headache Disorders Advocacy (AHDA) in Washington, D.C., since 2007. She has also served on the AHDA board of directors since 2018.

For the American Headache Society (AHS), she is currently serving her first term as an at-large member of the board of directors, and she also serves on the Education and Scottsdale Program Planning committees. In the past, she has been chair or co-chair of several Special Interest Sections of the AHS. She is an original member of the First Contact: Headache in Primary Care Working Group, and presently serves as senior adviser.

Dr. Nahas is section editor for Current Pain and Headache Reports, and is a member of and test-item writer for the United Council for Neurologic Subspecialties Headache Medicine exam committee. Her research focuses on neurobiological and molecular triggering mechanisms that lead up to migraine attacks in order to identify treatment targets for the prevention of attacks and disease progression. Her group is also studying the pathogenesis of monogenic disorders such as hemiplegic migraine and cerebral hereditary angiopathies, which serve as models for migraine pathogenesis and help improve insight into the pathophysiology of common neurovascular disorders, including stroke and vascular dementia. Dr. Terwindt is involved in exploring the migraine–stroke relationship, with a special focus on female-specific triggers for migraine and stroke. She has published over 350 scientific papers and received a prestigious personal grant from the Dutch Research Council.

Dr. Terwindt received her master of science degree in biology and her doctor of medicine degree at the University of Leiden, Netherlands. Her PhD research centered on the epidemiology and genetics of migraine and resulted in the discovery of the first migraine gene. Joseph Coe, MPA, is the director of Education and Digital Strategy for the Global Healthy Living Foundation (GHLF) and co-president of GHLF Canada. In addition to his management responsibilities, he creates global digital strategy — including social media, video, and podcasts — for patient education, advocacy, research, and support initiatives. Joe is responsible for the successful #CreakyChats monthly Twitter chat that reaches an average 11 million people per chat in the chronic disease community. In addition, he leads the growth and development arm of the GHLF’s patient-centered neurology projects, including those relating to migraine disease.

He created and hosts the GHLF’s migraine and headache podcast Talking Head Pain, and he has been a featured panelist and speaker for major healthcare organizations and Fortune 500 companies on such topics as patient centricity and healthcare disparities. Dr. Cohen is one of the few headache specialists in the country trained in both internal medicine and headache medicine. His research has been published in several medical journals, including Headache, Cephalalgia, Pain Medicine, and Neurotherapeutics, and he serves on the editorial board for Headache: The Journal of Head and Face Pain.